Telescopic gates … how to automate them?

Telescopic gates … how to automate them?

When there are space problems, the so-called telescopic gates are the perfect choice because when they are open they take up less space than any other solution. They are usually split into two or three leaves, sometimes even more.

The most common type is composed of two side-by-side leaves which slide on parallel ground guides that allow the simultaneous movement of all the leaves. During the opening phase, the leaves fold together, completely overlapping one another.

But how is a telescopic gate automated?

There are no major difficulties for the construction of this type of gates, nor for their automation. To automate a telescopic gate, TAU recommends the gearmotor T-ONE10B.

Telescopic gates have the characteristic of opening the gate at double the speed of a traditional sliding gate. 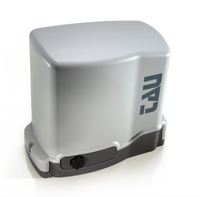 T-ONE10B is a gearmotor of the T-ONE series equipped with the latest generation electronics that allows the installer to slow down the speed so that the second leaf of the telescopic sliding gate does not slam in the final phase of the stroke.

Watch the videos of typical installations